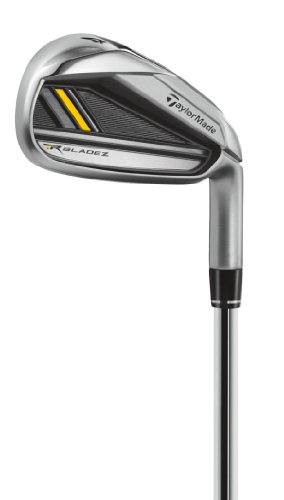 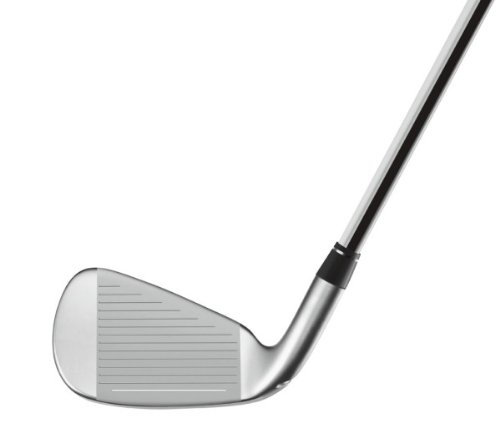 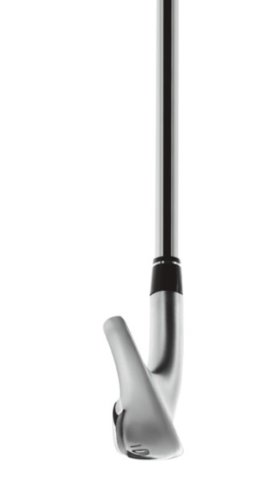 Prices pulled from the Amazon Product Advertising API on:

Product prices and availability are accurate as of the date/time indicated and are subject to change. Any price and availability information displayed on [relevant Amazon Site(s), as applicable] at the time of purchase will apply to the purchase of this product.

If you are an avid golfer, you probably know that irons hold a special significant place in your kit and finding an appropriate set that compliments your style and improves your game is necessary.

The quality, performance and convenience of iron sets can never be undermined for a fulfilling game of golf. And the TaylorMade Men’s Rocketbladez Tour Iron Set fits this bill very well. It is classy, clean and forgiving in a way that is appealing to most tour players.

The Rocketbladez Tour Irons’unique selling proposition is the ease with which it can be played, which is so unlike a tour iron set that is meant for low handicap players. These irons give plenty of opportunities to ‘putt’ rather than ‘chip.' The accuracy and forgiveness of the iron are consistent, giving them the benefit of added workability and smoothness.

What is the TaylorMade Rocketbladez Iron Set? And why you should choose this iron set?

Since its introduction, the Rocketbladez has always been touted as apt for the low handicappers.

The performance of the standard Rocketbladez has always been considered rewarding for all the golfers. So, what is distinguishing about this tour iron set and who is it aimed at?

The Powerful ‘Feel’ And ‘Good’ Of The TaylorMade Rocketbladez Iron Set:

For starters, the crisp, loud sound and powerful feel of this iron set gives a reassurance better than that of the standard series. The slot placed at the bottom of the Iron gives the Ball the requisite speed, the desired distance, consistency, and forgiveness in case of miss- hits.

This is a sleek version which ideally suits tour players who excel in mid- range shots giving the powerful feel and the requisite distance that low handicappers and professional players look for. The speed of the ball is high, the spin is not a restriction, and this is a tour iron set that comes with stronger lofts. The consistency of ball- flights is mainly because of the the sweet spot.

The Build Of The Rocketbladez Tour Iron Set:

This tour iron comes with a thinner top- line and sole and a different grip from the standard version. The head shape is compact and comes with a low offset. The small cavity and thin clubface add speed and distance to the iron.

The new inverted cone and clubface design together help in driving the ball straight down the target line, instead of the slight angle drives which are characteristics of the traditional fast-faced irons.

Performance Of The Rocketbladez:

The Speed Pocket technology improves the performance by giving a suitable launch angle, increase in the ball speed, a higher and rewarding trajectory, great length, soft landing, steep and quick-stopping descent angle, and a shot- to-shot consistency. The speed pocket thus induces greater ball speed and distance. The Speed Pocket enhances the smooth flight of the ball to give a good height and distance.

Who Can Derive Maximum Benefits From The Rocketbladez Tour?

It is a good workable option for players who adapt the ‘attack’ strategy. It is not for every tour player. The Rocketbladez may be a good option for players with low handicaps, rather the better players. Because, it is designed to improve the performance of the better players who handle the mid- ranges with ease. If you are a low handicapper, it may be worth your while, to test this tour iron and you will know that with the standard head and different shafts available it is a competitive tour performance enhancer.

How Does It Compare?

Let us now look at how the TaylorMade Rocketbladez compares with its competitors:

The Rocketbladez unique selling proposition has always been longer, higher, and softer. The performance of this tour in comparison with other iron sets may help prospective buyers understand the product better. 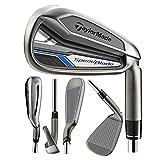 The former ‘casts’ well rather than forge, whereas the latter ‘puts’ better than ‘cast.' The Speed Blade gives a flatter and more penetrating flight when compared to the

Rocketbladez. The consistency of distance between the shots for the two models are almost the same, whereas the dispersion in the Speed Blade is tighter. 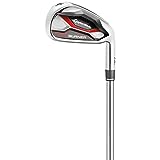 The Aero Burner Tour Iron is bulky and yet is a very forgiving model. Like the Rocketbladez it is chunkier and has more offset. It is easier to hit to the left, whereas the right to left is what is predominant in Rocketbladez. The swings are slightly lighter in comparison and the loft angle higher.

The playing length for the two, however, remain the same. The Rocketbladez scores more on consistency. The TaylorMade Irons come with different specifications and for different purpose and one can always order a customised combination set to suit all requirements.

The Ping G25 cannot be categorized based on handicap forgiveness. The G range from Ping unlike the Rocketbladez easily fit the mid to high- range handicap players, and the latter suits the low handicappers. The Ping is for all sorts of players with different capabilities.

The top line and the sole are slimmer, and have a reduced offset. They give the feel of a powerful forged iron. Overall, the Rocketbladez and the Ping G25 have an uncanny resemblance in terms of the feel, loft power and strength. However, the level of forgiveness is different for the two.

The Rocketbladez from TaylorMade have generated a lot of attention and interest ever since their introduction. The Speed Pocket technology and the unique designing are a testimony of the research that has gone into the development of its product. These are very forgiving and able to withstand bad swings many a time. That said, it is not all golfers. Go for it, if you are a low handicap player and tilt more towards right to left. This tour iron helps bridge the void between the iron clubs that are apt for beginners and the irons that are meant for professionals with very limited handicaps.